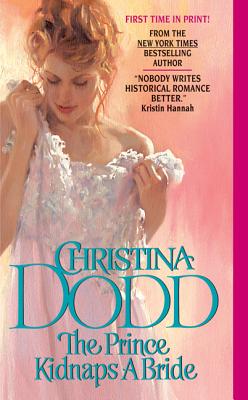 By Christina Dodd
$7.99
Email or call for price.

This is book number 3 in the Lost Princess Series series.

Betrothed in the cradle, Princess Sorcha and Prince Rainger were destined to rule their countries together. Then revolution sent Sorcha to a remote Scottish convent—and Rainger into a dungeon so deep rumor claimed he was dead.

Now danger threatens, and Sorcha must travel home with a simple fisherman as her companion—Prince Rainger in disguise. Changed by his imprisonment from a careless lad to a dangerous man, he's determined to win back his kingdom—and the woman he wants more than life itself. But can he protect a woman who believes every person she meets is her friend, every tavern is an opportunity to sing bawdy songs, and each turn in the road hides new adventure? To keep his princess safe, he must resort to his most treacherous weapon: seduction.

New York Times bestselling author CHRISTINA DODD builds worlds filled with suspense, romance, and adventure, and creates the most distinctive characters in fiction today. Her fifty novels have been translated into twenty-five languages, featured by Doubleday Book Club, recorded on Books on Tape for the Blind, won Romance Writers of America’s Golden Heart and RITA Awards, and been called the year's best by Library Journal. Dodd herself has been a clue in the Los Angeles Times crossword puzzle.