Stepping to a New Day: A Blessings Novel (Paperback) 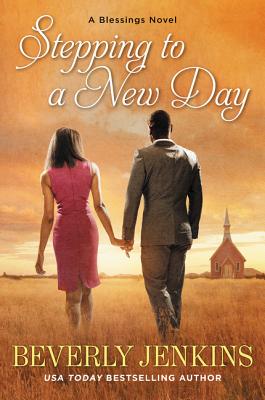 By Beverly Jenkins
$14.99
Likely On Our Shelves Now

This is book number 7 in the Blessings series.

NAACP nominee and USA Today bestselling author Beverly Jenkins returns to the town of Henry Adams with a story of family, friendship, love, and second chances.

In Henry Adams, Kansas, you can’t start over without stirring things up . . .

Many a good woman has had to leave a no-good man, but how many of them took a back-seat to his 600-lb. hog? On her own for the first time, Genevieve Gibbs is ecstatic, even if certain people preferred the doormat version of Ms. Gibbs. Finding someone who appreciates the “new” her has only just hit Gen’s to-do list when T.C. Barbour appears in her life.

A tiny Kansas town is a far cry from his native Oakland, California, but it’s just the change T. C. needs. While helping his divorced nephew acclimate to single fatherhood, T. C. lands a gig driving a limo for the most powerful woman in Henry Adams. It’s a great way to meet people—and one in particular has already made the job worthwhile. All it takes is a short trip from the airport for Genevieve to snag T.C.’s attention for good.

But it wouldn’t be Henry Adams without adding more drama to the mix. When Gen’s ex Riley returns with his hog in tow, it sets off a chain of events that can ruin everything—unless the residents pull together once again to save the day.

“It’s easy to lose hours at a time caught up in this book. An achingly sweet feel-good story of love and redemption of all kinds.”
— Kirkus Reviews