The Chaos of Luck (A Felicia Sevigny Novel #2) (Paperback) 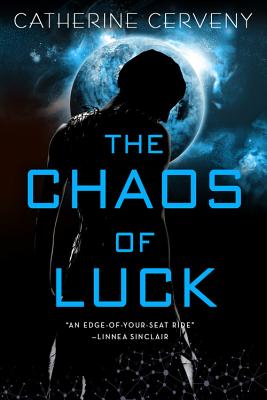 By Catherine Cerveny
Email or call for price.
Special Order

This is book number 2 in the A Felicia Sevigny Novel series.

A Brazilian tarot card reader and a Russian crime lord race to stop a conspiracy in this steamy science fiction adventure -- the sequel to the exciting series that began with The Rule of Luck.

Mars, the terraformed jewel of the TriSystem, is the playground for the rich and powerful. A marvel of scientific engineering, the newly colonized world offers every luxury. For the first time in human history, the picture perfect life is possible.

Felicia Sevigny's come to the Red Planet for a fresh start. She's brought the tarot cards that have been her family's trade for generations but is hoping to leave the rest of her troubled past behind.

Felicia wants to believe that Mars will also be a clean slate for her and Alexei Petriv, notorious leader of the Tsarist Consortium, but her cards keep predicting something even darker and more insidious is ahead. Something that could mean the end, not just for her and Alexei, but for the entire TriSystem -- and all of humanity.

Catherine Cerveny was born in Peterborough, Ontario. She'd always planned to move away to the big city but the small town life got its hooks in her and that's where she still resides today. Catherine is a huge fan of romance and science fiction and wishes the two genres would cross paths more often.

"Imaginative. Fans of romance in science fiction are going to love this!"
—Kim Harrison, #1 New York Times bestselling author on The Rule of Luck

"Cerveny's debut blends steamy sci-fi with breathless intrigue and action, all set on a far-future Earth that's equal parts fascinating and terrifying."
—Beth Cato, author of The Clockwork Dagger and Breath of Earth on The Rule of Luck

"A compelling and intriguing read built on a fascinating premise. Cerveny's future world is richly drawn, and Felicia's and Alexei's adventure is definitely an edge-of-your-seat ride."
—Linnea Sinclair, award-winning author of the Dock Five Universe series on The Rule of Luck

"Catherine Cerveny delivers the perfect blend of futuristic intrigue, engrossing action, and passionate romance in a riveting adventure that will leave you hungry for more. Intensely absorbing. Emotionally satisfying."
—Amanda Bouchet, author of the Kingmaker Chronicles on The Rule of Luck

"A fresh heroine pairs with a dangerous hero to confront nuanced and compelling ethical dilemmas... fast-paced, tightly plotted."
—RT Book Reviews on The Rule of Luck

"A novel with depth... a terrific story."
—The Qwillery on The Rule of Luck