Unwell Women: Misdiagnosis and Myth in a Man-Made World (Hardcover) 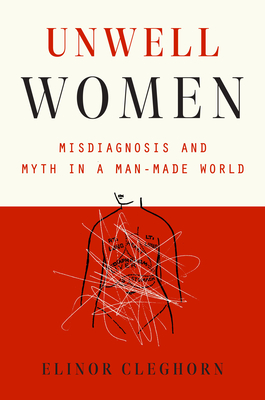 A trailblazing, conversation-starting history of women’s health—from the earliest medical ideas about women’s illnesses to hormones and autoimmune diseases—brought together in a fascinating sweeping narrative.

Elinor Cleghorn became an unwell woman ten years ago. She was diagnosed with an autoimmune disease after a long period of being told her symptoms were anything from psychosomatic to a possible pregnancy. As Elinor learned to live with her unpredictable disease she turned to history for answers, and found an enraging legacy of suffering, mystification, and misdiagnosis.

In Unwell Women, Elinor Cleghorn traces the almost unbelievable history of how medicine has failed women by treating their bodies as alien and other, often to perilous effect. The result is an authoritative and groundbreaking exploration of the relationship between women and medical practice, from the "wandering womb" of Ancient Greece to the rise of witch trials across Europe, and from the dawn of hysteria as a catchall for difficult-to-diagnose disorders to the first forays into autoimmunity and the shifting understanding of hormones, menstruation, menopause, and conditions like endometriosis.

Packed with character studies and case histories of women who have suffered, challenged, and rewritten medical orthodoxy—and the men who controlled their fate—this is a revolutionary examination of the relationship between women, illness, and medicine. With these case histories, Elinor pays homage to the women who suffered so strides could be made, and shows how being unwell has become normalized in society and culture, where women have long been distrusted as reliable narrators of their own bodies and pain. But the time for real change is long overdue: answers reside in the body, in the testimonies of unwell women—and their lives depend on medicine learning to listen.

Elinor Cleghorn has a background in feminist culture and history, and her critical writing has been published in several academic journals, including Screen. After receiving her PhD in humanities and cultural studies in 2012, Elinor worked for three years as a postdoctoral researcher at the Ruskin School of Art at the University of Oxford on an interdisciplinary arts and medical humanities project. She has given talks and lectures at the British Film Institute, where she has been a regular contributor to the education program, Tate Modern, and ICA London, and she has appeared on the BBC Radio 4 discussion show The Forum. In 2017, she was shortlisted for the Fitzcarraldo Editions Essay Prize, and she has since written creatively about her experience of chronic illness for publications including Ache (UK) and Westerly (AUS). She now works as a freelance writer and researcher and lives in Sussex.

“The book is a call to arms for any woman who feels that doctors have not adequately addressed her illness or pain.”
—The Washington Post

“Researcher Cleghorn provides an essential history of misogyny in health care.... This clear-eyed assessment is both a catalog of how medicine has been complicit in female oppression and a call to action for drastic reform.”
—Scientific American

“An intriguing exploration of the history of women’s health. . . . Unwell Women by Elinor Cleghorn shows us that without acknowledgment and understanding of these issues, these ills will continue on into new generations and in untold eras. We owe it to ourselves as a society to understand.”
—The Chicago Review of Books

“[An] eye-opening new book. . . . Cleghorn meticulously constructs an often enraging framework to evince how and why the patriarchal medical world has been so detrimental to women, especially underserved women and women of color.”
—The Guardian

“[A] fascinating new book. . . . At once an enraging, meticulous history and an intimate personal story, Unwell Women is an exploration of women's unique and (often fatally) misunderstood treatment in medicine, and a call to change our deeply engrained assumptions about healthcare.”
—Salon

“Thoughtful and often disturbing, this exhaustively researched book shows why women—including minority women and Cleghorn herself, who has lupus—must fight to be heard in a system that not only ignores them, but often makes them sicker. Powerful, provocative, necessary reading.”
—Kirkus, starred review

“Seamlessly melding scholarship with passion, Unwell Women is the definition of unputdownable.”
—The Telegraph

"Not just a compelling investigation, but an essential one"
—The Observer

“[Cleghorn] combines her own story with a feminist history of illness and a plea for better listening. It shows how centuries of ignorance and condescension led to failings that endure today.”
—The Economist

“A deeply stirring book about women’s illnesses.... Personal and impactful and brings to light the compelling need to do right by all the unwell women.”
—Book Riot

“Elinor Cleghorn has written a sprawling history about women’s health and the various ways it was misunderstood and sidelined within medicine, and the lingering impact of decisions made centuries ago. Treat Unwell Women as if it’s a textbook. You’ll be armed with the necessary information to advocate for yourself with all of the medical practitioners tasked with treating you.”
—Bitch Magazine

In Unwell Women, Cleghorn provides an extensive history of how feminine anatomy, physiology, and psychology have been studied and manipulated—mainly by men—and how they have often been used to oppress the female sex. . . . Meticulously researched. . . . Cleghorn’s final message should be heard loud and clear: Believe women.”
—Science Magazine

“[A] powerful history of misogyny and racism in health care.”
—Nature

“Unwell Women is a powerful and fascinating book that takes an unsparing look at how women's bodies have been misunderstood and misdiagnosed for centuries. From wandering wombs to demonic explanations of menopause, Elinor Cleghorn packs each page with disturbing historical details that will haunt your psyche for days and weeks to come.”
—Lindsey Fitzharris, author of The Butchering Art

“If doctors have ever misdiagnosed you, disbelieved your symptoms, or discriminated against you, then Unwell Women is the holy grail of answers you have been waiting for. Elinor Cleghorn has written a decisive, comprehensive, well-researched, and fascinating book about the ways in which medicine has failed women throughout history until now, and what that neglect has cost us—including our lives. I wish I’d had this book in 2018 when I was fighting with my gynecologist to remove my fibroids, but I am glad to have it as I navigate two chronic illnesses. As we continually negotiate power dynamics with doctors, Unwell Women will instantly become an invaluable addition to the arsenal of tools we need to fight for the care we deserve.”
—Evette Dionne, author of Lifting as We Climb

“An epic yet accessible social, cultural and scientific history of women's health traces the roots of sexism and racism in modern Western medicine from ancient texts through to the present day.... A powerful and necessary work of social and cultural history.”
—Shelf Awareness

“A new book by British historian Elinor Cleghorn that’s equal parts fascinating and infuriating.... ‘The lives of unwell women depend on medicine learning to listen,’ Cleghorn concludes. And reading this immaculately researched and written book is an excellent place to start.”
—PureWow

“Feminist historian and academic Cleghorn, herself a victim of medical misdiagnosis, brings first-hand knowledge of the gender bias endemic in the medical profession to this scholarly yet personal, specific yet comprehensive study of dangerously outdated medical practices and attitudes.”
—Booklist

“An insightful account that is especially recommended for those interested in the history of medicine where it intersects with women's health, as well as readers interested in women's and gender studies.”
—Library Journal

"If you live in a female body, and if you've ever thought to yourself, ‘Why-oh-why are doctors not taking my legitimate health concerns seriously,’ this book answers that question definitively. This history of the female patient is the one I was searching for the entire time I was writing my own book, and I cannot recommend it highly enough. One thousand more books like this, please."
—Sarah Ramey, author of The Lady’s Handbook for Her Mysterious Illness

"Unwell Women is one of the most important books of our generation. I read it in a rage, and recognized myself in its pages."
—Fern Riddell, author of Death in Ten Minutes

“This book will make you angry. And so it should! Just like their brains, women’s bodies have been treated as defective and deficient for centuries. This book shows how women’s biology has been historically stigmatised, how a combination of ignorance, mythology and misogyny has conspired to deprive women of the medical support they have needed. But women have fought back, and this book is also a testament to their courage and resilience in the face of stereotypical views about women’s place in society and how that is determined by their biology. Even in the 21st Century Cleghorn uncovers harsh truths about medicine’s continuing biases, especially in the intersection between gender and race. Hopefully this book will be a wake-up call to a profession that can still refer dismissively to ‘women’s problems.’”
—Gina Rippon, author of The Gendered Brain

“A searing, brilliant investigation, an intricate and urgent book on how women's health has constantly been misunderstood and miscast throughout history, how men invented  theories that plunged women into misery, pain and even death - from Anne Greene hanged for a miscarriage to the 1940s housewives lobotomised or subject to other operations to treat their depression, from drugs intended to 'control' women's health that were rushed to market to women experimented upon in the name of science, the cruel differential treatment of women of colour. Cleghorn unmasks with devastating clarity how so much of 'women's health' has been tied into efforts to control women, inculcate what was proper feminine behaviour and slot them into patriarchal culture as happy reproductive units.”
—Kate Williams, author of Rival Queens

"At once grand in scope and deeply personal, Unwell Women is a powerful and important exploration of the history of Western medicine. Elinor Cleghorn lays bare centuries of unnecessary suffering in this meticulously researched, scorching indictment of how male-focused medicine has failed women – and shows us how far we still have to go."
—Emily Brand, author of The Fall of the House of Byron

“This is a fascinating look at history, Unwell Women is both captivating and enraging - a worthy voice for so many women who have been silenced for so long.”
—Catherine Cho, author of Inferno: A Memoir of Motherhood and Madness