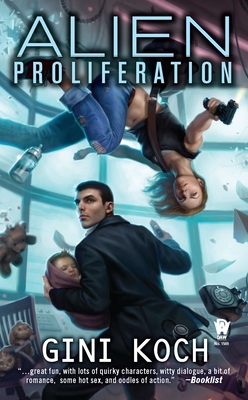 This is book number 4 in the Alien Novels series.

After the wildest wedding ever, Katherine "Kitty" Katt-Martini and her Alpha Centaurion husband Jeff are hoping life will settle down. But alien attacks are on the increase, and someone is testing a  dangerous new drug on unwilling subjects within their group. As if that's not enough, they discover that their newborn's talents are off the charts—and the bad guys want their baby.

The last thing anyone in Centaurion Division needs after that is a conspiracy to kill the heads of the C.I.A.'s Extra-Terrestrial Division and the Presidential Terrorism Control Unit, otherwise known as Charles Reynolds and Kitty's mother, Angela Katt. Then, suddenly, key members of Alpha and Airborne start vanishing.

Can Kitty, her remaining team members, friends old and new, and a totally unexpected new partner rescue everyone and figure out why Kitty's become a superhuman? Most importantly, can they pull it all off before the event Kitty dreads most—her Alpha Centaurion baby shower?

Alien Proliferation is the fourth installment of the thrilling Alien novels.

“For those craving futuristic high-jinks and gripping adventure, Koch is an absolute master!” —RT Reviews

“Gini Koch has created a monster with the Katherine ‘Kitty’ Katt series that continues to grow.” —Gizmo’s Reviews