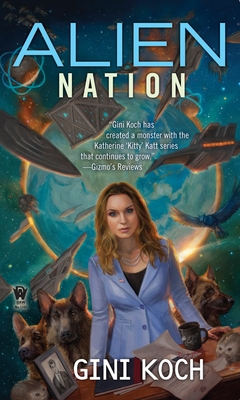 This is book number 14 in the Alien Novels series.

It’s a typical day of bureaucracy and stress for President and First Lady Jeff and Kitty Katt-Martini, made more stressful when alien spacecraft are spotted making a beeline for Earth, none of them from the Alpha Centauri system.

Then a cryptic request from an old adversary pulls Kitty out of the White House and into an explosion—and an even more explosive situation. Not only is the Mastermind back in the game, influencing the Club 51 True Believers to find and destroy all Centaurion bases, but he’s also found a dangerous benefactor and created some frightening new cloning abilities.

And, just to make things a little more challenging, those alien spacecraft are coming to ask Kitty for protection, and asylum on Earth. Police stations being blown up and war helicopters in play aren’t enoughto keep Kitty down, especially when she’s got some new alien friends helping out.

But what these aliens share will rock the world—the other aliens on their way to Earth are fleeing an enemy so terrifying that even a Z’porrah ship is trying to get to Earth for safety and protection. And if Earth isn’t able to stop this threat, there may not be anything left of humanity.

Now Kitty and Company have to figure out where the Mastermind is and stop him, before any new aliens land. And then they have to save the world from a deadly invasion. Or, as Kitty calls it, Thursday.