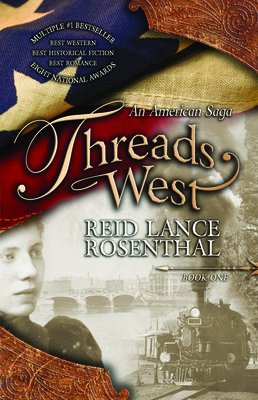 Book One and name sake of the sweeping #1 bestselling Threads West, An American Saga epic saga--winner of twenty-eight National Literary Awards in numerous categories including Historical Fiction, Multi-Cultural, Romance and Western. This novel and the ensuing books of this monumental multi-era epic saga are compared by reviewers and authors to Lonesome Dove, Centennial, and the Sacketts of Louis L'Amour. Called by some reviewers, ''The Gone With The Wind of the West.'' Applauded by others as ''rings true and poignant, as authentic and moving as Dances with Wolves" and "the Sacketts on steroids," the tale bursts with the adventure, romance and promise of historical America, the American spirit and the West.

You will recognize the characters who live in these pages.
They are the ancestors of your friends, your neighbors, your co-workers, and your family.
They are you. They are us. We are all Americans.
This is not only their story. It is our story.

The epic saga of Threads West begins in May 1854 with the first of five, richly textured, complex generations of unforgettable, multicultural characters ensconced in their individual lives and dreams in the Rockies, England, Ireland, Norway, Denmark, Prussia, Mexico, the Great Plains, St. Louis and New York. They share neither country nor culture in common--indeed none of them know the others exist--but the separate lives of these driven men and independent women from Europe and North America will be drawn to a common destiny that beckons seductively from the wild and remote flanks of the American West.

Five thousand miles across the Atlantic from the villages and cities of Europe, and one thousand miles to the west of St. Louis, lies the lawless, untamed spine of the continent, the Rocky Mountains. Their energy draws this vanguard of generations into the dangerous currents of the far-distant frontier. Swept by the mysterious rivers of fate, the power of the land and America's promise, their journeys are turbulent quests intertwined with courage and cowardice, romance and adversity, passions and pathos, despair and triumph. Their destinies and those of their offspring will be dramatically altered by events and history they cannot foresee and others of uncommon cultures and differing origins they cannot imagine.

The personal conflicts inherent to these brave, passion-filled characters are exacerbated by a nation in transition, the budding enmity between North and South, broken treaties with Native Americans and lives and generations woven on the loom of history, propelled by fate and freedom to form the tapestry that becomes the whole cloth of the nation.

The touchstones of the past are the guideposts to the future. This, the first novel of this epic saga--the tale of America, set in the West--is the stirring story of many life threads of divergent cultures, and competing ambitions that entwine to become what the world knows as, Americans.

In the following books of the saga, the heroic but conflicted men and women of Threads West continue their dangerous journeys, their layered personalities forged on the anvil of the land, their paths intersecting with the trails of others, melding the American mosaic, setting in motion the weave of the American fabric, and generational liaisons impossible to envision. Momentous change will continue, igniting further greed and compassion, courage and treachery, rugged independence, torrid passions and fierce loyalties.

The decades of the Maps of Fate era (1854-1875) novels of Threads West, An American Saga epic saga are the crucible of the souls of generations, the building of the heart of the nation, and the destiny of a people at a magical moment in the American history. You will enjoy our story--because it is your story.

Reid is fourth generation land and cattle, a rancher, and a multiple #1 bestselling author whose works have been honored with twenty national awards. His cowboy heart and poet's pen capture the spirit of the western landscape and its influence on generations of its settlers. His long-standing devotion to wild and remote places and to the people--both past and present--who leave their legend and footprint upon America and the American West, is the inspiration and descriptive underpinning of all of his writing. "If your mind and spirit are seduced by images of windswept ridge tops, flutters of aspen leaves caressed by a canyon breeze and the crimson tendrils of dying sun...if your fingers feel the silken pulse of a lover and your lips taste the deep kisses of building desire...if nostrils flare with the conjured scents of gunpowder and perfume, sage brush and pine, and your ears delight in the murmur of river current...if your heart pounds at the clash of good and evil and with each twist and turn of interwoven lives you feel a primal throb, then I have accomplished my mission." Reid Lance Rosenthal Passion fuels each thrilling, history, action and romance-packed novel in this widely acclaimed five-generation epic series of the historical and contemporary American west. Threads West has been compared to L'Amour, and Centennial, and some call the series, the "Gone With The Wind of the West."