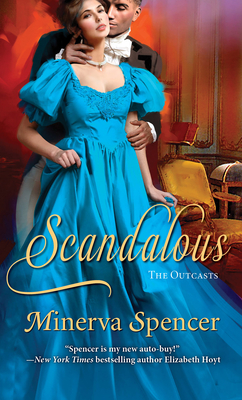 By Minerva Spencer
$7.99
Likely On Our Shelves Now

This is book number 3 in the The Outcasts series.

“Have you no decency?”

Straight-laced missionary Sarah Fisher has never met a man like Captain Martin Bouchard. He is the most beautiful person—male or female—she’s ever seen. Overwhelmingly masculine, elegantly attired despite months at sea, he is in complete command of everyone and everything around him: everyone, that is, except Sarah. But that’s about to change because Sarah has bought Bouchard’s mercy with the only thing she has to sell: her body.

In spite of her outrageous offer, Martin has no doubt Sarah is a virgin, and a most delectable one at that. But instead of bedding her, he finds himself staring down the muzzle of his own pistol. Clearly, the longer she stays on his ship, the greater the chances that she’ll end up its damned captain! Most infuriating of all, she looks past his perfect exterior to the wounded man inside. Can Martin outrun his scandalous past in time to have a future with the first woman to find and capture his heart?

Praise for The Outcasts series

“A remarkably resourceful heroine who can more than hold her own against any character invented by bestselling Bertrice Small . . . deliciously fun retro flavor.”
—Booklist (Starred Review)

Minerva Spencer was born in Saskatoon, Saskatchewan. She has lived in Canada, the US, Europe, Africa, and Mexico. After receiving her M.A. in Latin American History from The University of Houston she taught American History for five years before going to law school. She was a prosecutor and labor lawyer before purchasing a bed and breakfast in Taos, NM, where she lives with her husband and dozens of rescue animals.