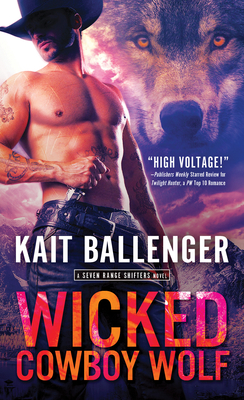 By Kait Ballenger
$7.99
Likely On Our Shelves Now

Her thoughts turned to the kiss they'd shared. Sure, she'd been kissed before, but never like that.
Never in a way that had left her feeling forever changed, like the memory of it was as much a part of her as any of her limbs.
She could still feel the tingling sensation on her lips, and dark criminal or not, she wanted more.

Years ago, Grey Wolf Jared Black was cast from the pack for a crime he didn't commit. If they wanted him to be an outlaw cowboy, fine. Now, he's the mysterious criminal wolf known only as the Rogue, a name his former packmates won't soon forget. But when a vampire threat endangers the lives of their entire species, Jared must confront his former packmates again, even if that means betraying the only woman he's ever loved...

Ever since Maeve Gray escaped the pack's bloodsucking enemies, she's been determined to save her species--and fast. But when a wicked cowboy wolf shows up on the Grey Wolf ranch, offering everything Maeve's heart desires, her eyes are opened to a whole new world beyond the packlands. For this cowgirl, sleeping with the enemy could prove as desirable as it is deadly...

To his enemies, he's known as the Rogue. To her, he's her only chance at survival...