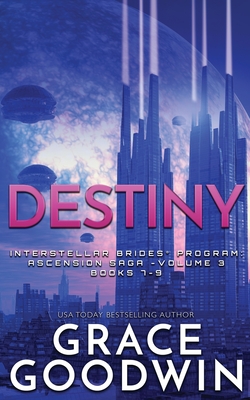 By Grace Goodwin
$14.99
NOT ON OUR SHELVES- available for order, usually ships in 1-5 days

Destiny Jones is a princess with a bad attitude. She doesn't play nice with others, she doesn't dress up in pretty clothes, and she has absolutely zero interest in behaving like a lady. Especially when she's so close to catching the people who tried to have her killed. Oh, and kidnapped her mother, queen of the planet Alera. Destiny's sex-starved body, and it's annoying Aleran Ardor, might kill her if her enemies don't find her first.

Vennix was trained to hunt and to kill from the shadows. After years of serving in the Hive wars as an elite member of the Coalition's Shadow Unit, he returned home to fight for the one thing he believes in, honor. Dedicating his life to the queen's guard was an easy decision--but watching the most beautiful woman he's ever met repeatedly risk her life is about to drive him mad.

Because Destiny is his. His body awakened for her. And if his new mate thinks Nix will stand idly by as she suffers without his skillful lover's touch, she is very, very mistaken...

Ardor or not, she's hunting a killer. Nix is going all protective, alpha male, claiming she's his mate just because she had a few mind-blowing moments in his bed. And she's trapped deep undercover in the most dangerous place on the planet. If anyone discovers the truth, she'll be dead. But if she gives up now, her mother will be lost forever.

Every time they get close, their enemy slips through their fingers like a thousand grains of sand. The hunt is on. The end is near. And if Nix dies protecting her, she'll never forgive herself.