Someone to Romance (The Westcott Series #7) (Mass Market) 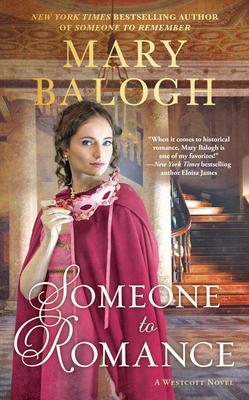 By Mary Balogh
$7.99
Likely On Our Shelves Now

This is book number 7 in the The Westcott Series series.

Love comes when you least expect it in this captivating new novel in the Westcott Regency romance series from New York Times bestselling author Mary Balogh.

Lady Jessica Archer lost interest in the glittering excitement of romance after her cousin and dearest friend, Abigail, was rejected by the ton when her father was revealed to be a bigamist. Now that she is twenty-five, however, Jessica decides it is time to wed. Though she no longer believes she will find true love, she is still very eligible. She is, after all, the sister of Avery Archer, Duke of Netherby.

Jessica considers the many qualified gentlemen who court her. But then she meets the mysterious Gabriel Thorne, who has returned to England from the New World to claim an equally mysterious inheritance. Jessica considers him completely unsuitable, especially when, while they are still barely acquainted, he announces his intention to wed her.

When Jessica guesses who Gabriel really is, however, and watches the lengths to which he will go in order to protect those who rely upon him, she is drawn to his cause--and to the man.

Mary Balogh has written more than one hundred historical novels and novellas, more than forty of which have been New York Times bestsellers. They include the Bedwyn saga, the Simply quartet, the Huxtable quintet, the seven-part Survivors' Club series, and the Westcott series.

Praise for Mary Balogh and her novels

"Wistful yet hopeful, the story is a needed addition to a genre that usually celebrates the romances of younger protagonists."—Kirkus Reviews

“The balance between sweet and bitter produces a complex and winning love story.”—Publishers Weekly

“The sheer perfection of Balogh’s prose in the fifth superbly written installment in the Westcott series marries her rare gift for crafting realistically nuanced characters to produce another radiant Regency historical romance by one of the genre’s most resplendent writers.”—Booklist, starred review

“With tenderness, humor, and infinite finesse, Balogh turns the classic younger woman/older man pairing on its well-worn ear in another sigh-worthy [novel] that readers are sure to savor.”—Library Journal (starred review)

“The quiet, authentic intensity of the characters’ emotions is a hallmark of Balogh’s work, and it is a pleasure to experience each heart-wringing moment in this romance made for warming a winter night.”—BookPage

“A love story nearly perfect in every way.”—Booklist, starred review

“A story that is searing in its insight, as comforting as a hug, and a brilliant addition to this series. Another gem from a master of the art.”—Library Journal, starred review

“With her signature voice and steady pace, Balogh crafts a thoughtful, sweet Regency-era love story to follow Someone to Hold.”—Publishers Weekly